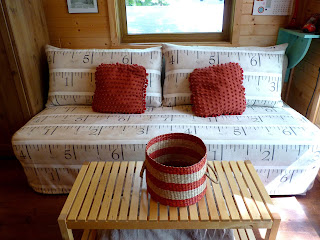 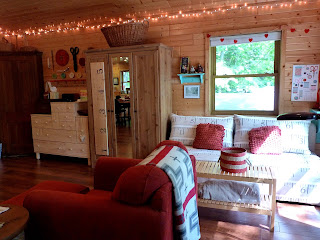 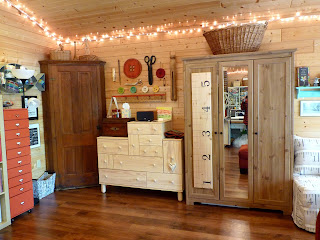 The twin bed that was up in the studio belonged to our oldest granddaughter, and it was reclaimed by her back in March.  We decided to replace it with an Ikea couch that folds down into a bed that is just slightly bigger than a double size.  The only color it came in was a light beige, which was really going to show any dirt.  I decided to make a slip cover for the seat part and also cover the two big back pillows.  I remembered a couch covered with a big measuring stick print at the Spoonflower headquarters in Durham, and located the design in their Marketplace.  I had it printed on their poly-suede fabric, and, a few simple seams later, a very cute couch!  I thought I would show you a couple of pictures of the Eastern wall of the studio to show not only the new couch, but the new corner cabinet.  My ex mother-in-law Alice passed away a year ago and had said she wanted me to have the large, antique corner cabinet that had been in her dining room.  A couple of the sons brought up the huge piece and it fits perfectly in the studio corner.  It is very roomy inside - it has all my fleece in it now, and you know how bulky that stuff is to store!  I taught Alice how to quilt, so I think she would love that her hutch is now at home in my sewing place!  Jerilynn
Posted by Jerilynn at 4:01 PM

Email ThisBlogThis!Share to TwitterShare to FacebookShare to Pinterest
Labels: Spoonflower