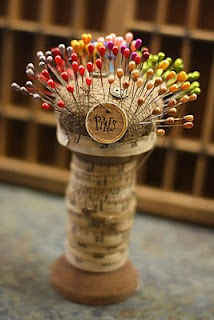 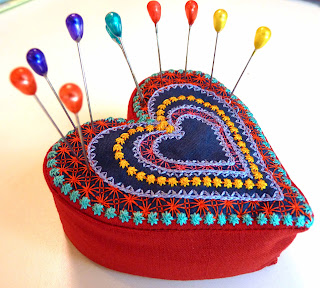 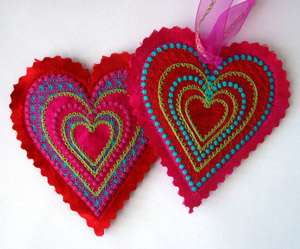 I have been OBSESSED with the image of the spool pincushion in the first image.  It is from here and the blog talks about how the pins are dyed using Tim Holz alcohol dyes.  Well, I researched the dyes and found out they are about $3.00 per color, mostly used for scrapbooking stamping.  I felt that I really couldn't afford all the colors I wanted just to dye the tips of egg-shaped corsage pins.  Let's not even consider that I would have to source the big wooden spool and the measurement printed ribbons (okay, I have the ribbons, but I would have to get some antique dye for them or tea dye them...).  You can see how I can sometimes lose hours just trying to figure out how to make something only to realize that it is just not a good idea.  I was still stuck on the colored pins, however, and took someone's advice (sorry, don't remember whose good idea it was!:(  and bought some permanent art markers and some white corsage pins.  Worked just great at a mere fraction of the cost - had a Michael's coupon!  I didn't have the spool pincushion, but I knew that the colored pins would come in handy.  Next obsession:  Sarah Vedeler!  I have loved her vibrant quilts and embroideries for some time now, and discovered on the Berninausa.com website, under "What's New" that she offered a free tutorial on how to make the heart ornaments that you see pictured in the third image.  Plus, the tutorial included a free machine embroidery file for the stitch-out.  So wonderful of her and Bernina!  I stitched out the heart and decided I didn't really need an ornament, but with a little bit of stitching and some crushed walnut shells, I could make a pincushion!  I colored me some big pins, stuck them in the cushion, and smiled.  Now my new heart pincushion (middle image) doesn't  resemble the first pincushion at all, but for now I am happy that I got to stitch out a free design and use some art markers.  Jerilynn
Posted by Jerilynn at 2:54 PM No comments: 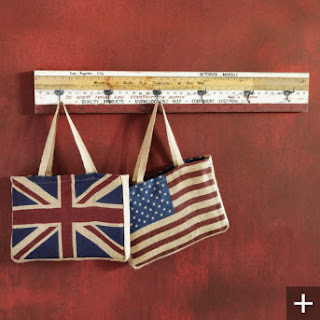 New project is done!  I got the new Grandinroad catalog two days ago and found several items that were very interesting.  One item was the yardstick wall rack with hooks, pictured directly above.  Yep, loved it...until I saw the price...$99.00!  Yikes.  I went to my stack of old yardsticks, found five candidates, and showed Carl the catalog.  Before I could say "Visa", Carl had found a board, nailed on the yardsticks and spray-painted some gold hooks black.  I think it measures up to the $99.00 version quite well, don't you think?  Jerilynn  P.S.  This rack is now hanging where the design wall used to be.  I have room above the rack for more wall stuff.  Glory be.
Posted by Jerilynn at 7:49 PM 1 comment:

Email ThisBlogThis!Share to TwitterShare to FacebookShare to Pinterest
Labels: Yardstick rack with hooks 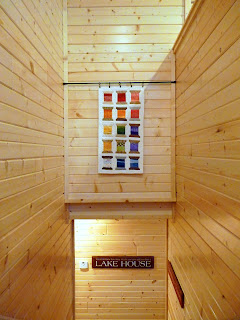 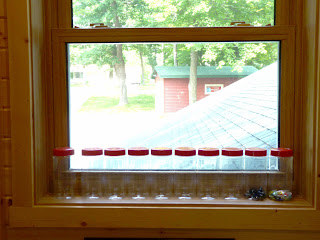 I wanted to hang my newly-made wonky spools little quilt in the stairwell going to the second level from the studio.  You can see how it was going to prove to be a challenge to hang a quilt rack, or even screw in a curtain rod without some life-endangerment going on.  Carl, brilliant and cute Carl, said "Use a tension rod".  Yes!  Perfect!  I can just lean over the half-wall (seen in the upper right of the picture), and tension the rod into place.  Very easy to change quilts when I get in the mood, too.  Shopko has a sale going on and I got the rod and a package of the cutest little black clip-on rings, 16 in all, for less than $10.  Deal of the day, I would say.  He also is helping me today with more studio projects.  A while ago I blogged about my Design Wall and how that was for sure going to make me an  "official" quilt-designer.  Well, I plopped up some Dresden Plates that were half done on the wall and there they hung for months and months.  In the meantime, we moved The Red Couch and The Red Chair up to the studio, and the couch half covered the wall.  Also, don't be shocked, but I was running out of wall space to hang stuff.  So, the decision was made to dismantle the design wall, thus freeing up a good chunk of valuable space.  I love, love my big windows here, but they do cut down on the ability to nail something up.  A new project is in the works, a collaboration between Carl and me, and once it is up I will be excited to show you what it is.  I'm in Heaven.  Jerilynn P. S.  My friend, Sally, had the cutest red-lidded plastic jars in her studio loft space on her window ledge.  She had all kinds of little treasures stored in them.  She got them at Bargain Bill's, a must-stop-at everything store in Rice Lake, WI.  After scoring the curtain rod sale, we stopped at Bill's and bought 10 containers for $6.90.  Above is a shot of them, not yet filled.  Oh, the possibilities!!!
Posted by Jerilynn at 2:59 PM 1 comment: 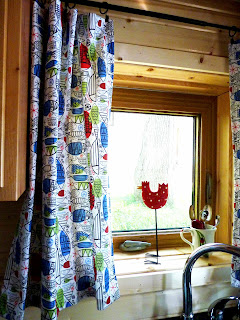 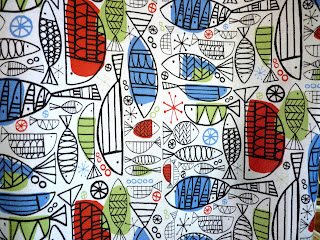 I think these curtains are the winners of the "what should I hang at the kitchen window" contest.  I bought this canvas fabric at Spoonflower.com a year or so ago, not having anything specific in mind, but loved the retro fish.  I had enough to hem the four sides of two panels, clip on some hoops, and hang.  We have been living with them for a few weeks and I think I should take the plunge and order more fabric for the three windows facing the lake.  If you haven't been to the Spoonflower site, why  not?  It is a  magical place where you can design your own fabric and have it printed on various types of fabric.  No ideas?  No problem.  Search by style or color for fabrics designed by others.  I have ordered some wonderful prints that are very unique and beautiful  The close-up of the fabric shows the funky fish.  I am going to try to recreate them in machine embroidery.  Where there is a solid color, that will be an applique, and then the black stitches will go on top of that.  A few of the asterisk shapes and the circles will be easy to do, too.  Kitchen towels and potholders to match.  How fun is that?  Actually, the most fun is the designing and execution, isn't it?  I have a sign above my desk that says "The journey is the destination."  So true.  Jerilynn
Posted by Jerilynn at 4:10 PM 4 comments: 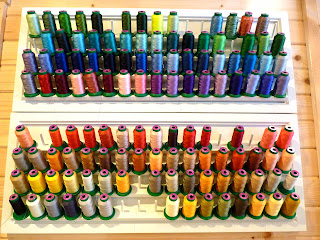 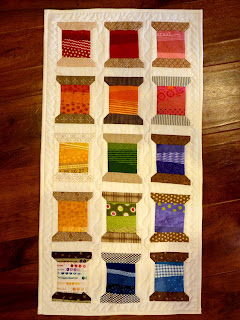 For my birthday Patrick and Sarah ordered a thread holder for my wall in the studio.  It is a Martha Stewart for Home Decorators piece and was backordered for 6 months!  I think she needs a new inventory control person.  Once put together and on the wall, I decided I loved it, wait and all.  I still had a bunch of thread leftover, so I ordered another unit, fully aware it could be months.  Within a week it arrived.  Crazy.  I got all my Isacord thread together, took inventory of what colors I had, and loaded the pins with thread, in numerical order!  It will be easy to find the colors I need.  I also know, now, what colors I can add.  Perfect!  Since I was in the Spool frame of mind, I thought I would make a little wall quilt for the studio based on Camille Roskelly's  Thuimble Blossoms #154 Spools pattern.  I made them a little smaller, and the center part of the spools are wonky-pieced.  The spool in the bottom left is pieced out of selvedges, just for fun.  I machine quilted in the ditch around each spool and then did some fancy machine stitches in the borders.  I need to have help hanging this...I want it over the stairway...I am sure I can find someone very willing to help!  Jerilynn
Posted by Jerilynn at 7:29 PM 2 comments: 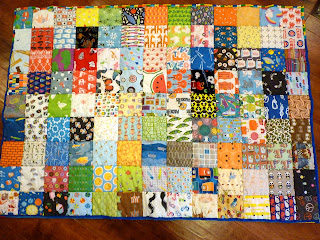 Hello!  Quite a few weeks of kids/grandkids...luckily the weather was hot and sunny and very conducive to Jumping In The Lake... and Fishing... and Playing On The Raft Float!  It is somewhat quiet here now for a bit with some friends coming and going to get a little sewing done.  My sewing room was only used for the "can you fix this?" type projects.  I didn't think you would find any of those repairs very interesting. Anyway, I have a list of things I want to get done and a few new things to try out.  Love me some sewing time with possibilities!  First item on the list was to finish another I Spy quilt for my son's friend's toddler.  The world map is on the back with lots of squares on front to investigate and talk about.  I usually use a cotton batting in my quilts, but this time I used a high-loft poly batt.  I remember when I made a snake quilt for my youngest son a while back, it got all done and the son said "Where is the puffy?"  In his eyes, a quilt needed to be poofy.  So, we will see if the puffy squares please this new little boy.  Find a box, address, send off, done!  Jerilynn
Posted by Jerilynn at 2:16 PM 1 comment: