A Cute Bag and A Cute Grandson 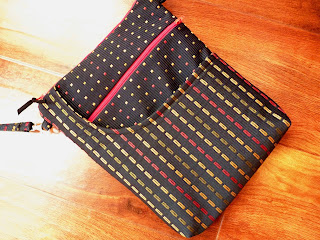 Finished a bag I have been working on.  It is A Cute Bag by Ginnie Kelly of Wonder Woman Quilts.  It is A Much Cuter Bag in person.  Color is off in the photo and I had a hard time getting it corrected.  Anyway, the fabric is a heavier home-dec fabric.  The stripey side is one side of the fabric, and the little square dots is the other side.  The reverse of the bag looks just like this side with the rounded pocket.  The two big outer pockets are closed with magnets, then there are two outside zipped pockets, one inside pocket for the cell phone, and one inside zipped pocket for treasures.  I added a zipper to close the top instead of the magnet in the instructions.  I also made the strap different.  I ran out of fabric - I used almost every bit of the fabric I had on hand - and didn't have enough for the wider strap which is supposed to attach to the top of the rounded pocket.  The fabric I used was just a bit too thick, but I managed to sew through all of the millions of layers just fine.  Trick is to use a very heavy needle - in this case it was a 110 topstitch needle, the kind I use to hem jeans.  I have been upstairs in the studio most of the day, while the electric stuff is being finished in the porch.  Our oldest grandson, Nick, has been working with his father, a commercial electrician, all summer.  Carl called Nick a couple of days ago and asked for help with finishing the electrical stuff.  Carl couldn't do it with his current finger mishap, but knew that Nick could do it.  Lucky us, Nick was able to come up today to help.  We now have working plugs, an outdoor light, a ceiling fan/light, and a hanging lantern light for over a table.  Carl is working on finishing the window and door trim before we put in the modular carpet.  It will be a race to see if it can be finished in time to use it a couple of times before the long winter freeze.  Happy hour will be under the lights on the screen porch tonight!  Woo hoo! Jerilynn

Posted by Jerilynn at 4:44 PM No comments:

These Shoes Are Made For Storing 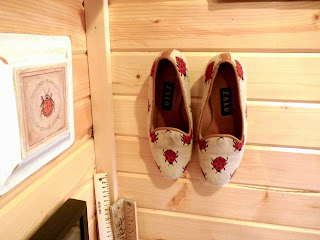 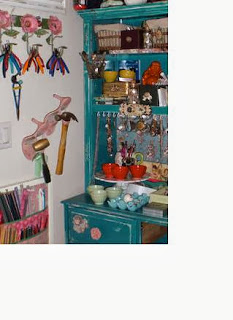 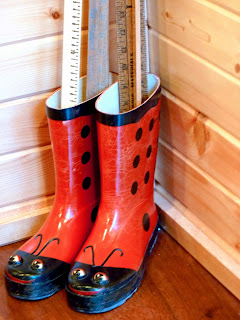 The picture in the middle is from ShelleyGerber.com, and it is a shot of part of her studio.  She is a multi-talented knitter, sewer, jewelry-maker, graphic designer, and so on and so on.  Her studio was shown in the Spring 2012 issue of Studios by Cloth.Paper.Scissors.  My friend Bonnie, of the Big Bottom Bonnie Bag fame, came up for a lesson on her new sewing machine.  She needed a little one-on-one instruction and I was happy to help.  She picked up this Studios issue and thumbed through and spied the pink shoes on the wall in Shelley's studio and said that is something I should do.  I agreed!  I was in the shoe business for many years and had some fun shoes that were just being stored in a box.  I couldn't get rid of them...they were just too cute.  I remembered the Zalo needlepoint ladybug flats that I purchased in New York for a ridiculous amount of money.  I wore them a few times, but, though cute, were a bit uncomfortable, and maybe just a tad quirky.  They remind me of my career days, and, because of the ladybugs, I just cannot send them to another home.  Carl, with his finger still bandaged, helped me pound in hangers in the heels, and the shoes now hang on my studio wall, in the "ladybug" corner.  I don't know what they are going to hold yet, but they look pretty darn perfect.  Much better than being in the box in the storage room.   Then I spied my old ladybug rain boots that haven't been used in quite a while.  They wanted to be part of the party, too, so now they are holding  yardsticks.  When we moved from our condo to the lake, I got rid of tons of stuff, but there were a few things that were just too dear or sentimental that I couldn't part with.  I wonder what else I could rescue from a box and give it new purpose?  Jerilynn  P.S.  We saw Carl's finger for the first time yesterday at the doctor's office.  Somewhat shocking.  He is back to his building project today, of course, not letting a shorter finger slow him down much.
Posted by Jerilynn at 2:42 PM No comments:

There Will Be a Slight Construction Delay.... 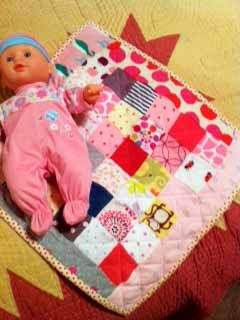 What a crazy few weeks!  I gave a talk/trunk show/demo at Sew Complete the first part of October.  Prior to that I sewed and created for hours a day to finish up some projects to show.  At the same time I sent off to Indygo Junction another Modern America quilt, this time an applique version for Fall Market. That was followed by a request for pillows to match.  I was keeping my nose slightly above water when I got the phone call that you don't want to get...."Jer, there has been an accident."  I was having lunch with my mom on the way home from the last lecture.  Carl was working with our builder on our new screen porch room and he was doing the sawing while Joe was doing the nailing.  Carl got distracted and ran his right pointer finger into the table saw.  Two ER trips, one reconstructive surgery, and two weeks later, Carl is doing good.  We go in tomorrow to take off the original surgery bandages.  He should have good use of the finger and joints, once the broken bones heal.  The finger will be shorter, part of the top bone was too crushed to save.  We are lucky that a hand reconstruction specialist happened to be coming to the hospital here the day after the accident.  We are lucky that Joe was here with Carl to take him to the ER.  I am lucky that Carl is the best-natured guy in the world and has been the best patient ever.  The first couple of days were rocky for him, but, other than a huge bandage on his right hand, he is back doing most everything.  I spent the last few days digging out my studio from the sewing frenzy/drop everything from the lecture.  I did find some time, however, to make a blanket for a doll for our youngest granddaughter, Addy.  Addy and her parents are going to Costa Rica for a couple of weeks on a sabbatical.  The doll, with extra clothes, will be an airplane toy.  I thought the baby could use a blanket, and had a few scraps left of Addy's first year clothes.  You may remember the blanket I made for Addy's first birthday.  Anyway, the little squares are 2.5" and are serged together then stitched to a soft blanket and bound.  The doll may not appreciate the softness, but I think Addy will like her baby having a blanket like hers.  The construction of the screen porch is still coming along.  Carl figured out he could use his nail gun with his left hand.  He is slowly sawing boards for the interior finish, but with much attention.  Whew.  Jerilynn
Posted by Jerilynn at 9:39 AM 1 comment: