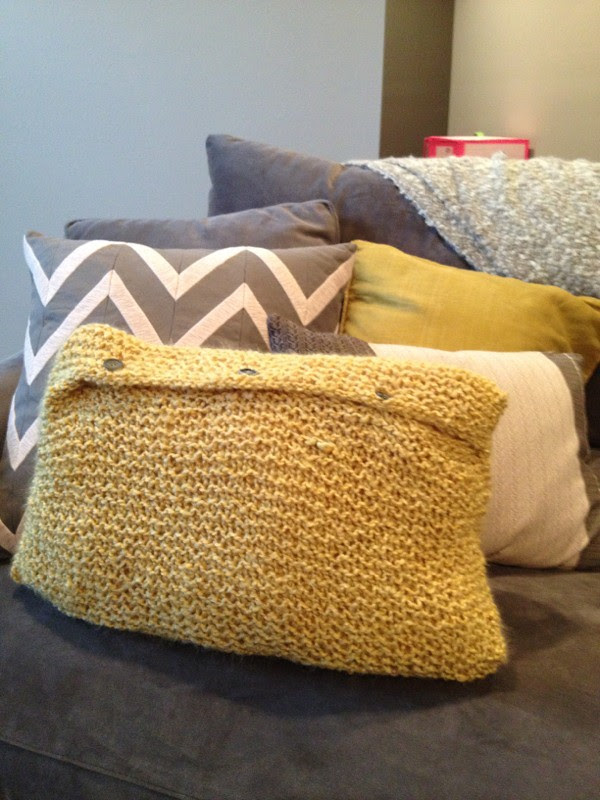 With the leftover yarn from the gold afghan, I made two throw pillows using a garter stitch. I overlapped two edges and closed up the sides. Added buttons and stuffed in a pillow form I made using a dark yellow cotton. They look comfy in their new home. I've been looking at my pillows around the cabin and thinking I need a new bunch. Know anyone who could make some for me? Jerilynn

Posted by Jerilynn at 9:40 PM No comments:

Summertime Memories in the Making 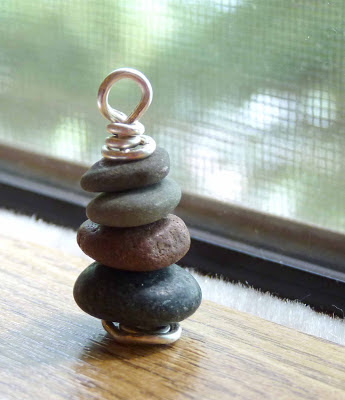 Yesterday I had an outing with a couple of friends from across the lake.  We went to a big old house just into Minnesota for a special sale of "treasures" that happens just a few times a year.  So fun.  I tried to remember my self-imposed buying ban, but I couldn't resist an old green metal tackle box, or a hand-stitched, HUGE, patchwork quilt in excellent condition for $24.  I had to buy it and give it a new home.  It was a rescue mission.  Anyway, we also stopped at the bead shop in Taylors Falls, MN.  I did very well.  I only bought some African Christmas beads to replace the ones I have used up.  They are the tiny, multi-colored beads that I love using as fillers.  A bargain at $2.50 a strand.  What I HAD to buy, however, were some drilled stones from Lake Superior.  When my kids were growing up, a trip to the North Shore of Lake Superior was THE best trip.  When it was hot and muggy in Chippewa Falls, it was fresh and beautiful on the shore.  Hours were spent just throwing little stones in the lake.  I saw those little stones, and knew I needed to make a little pendant.  It is only 1 1/4" x 1/2", with sterling silver wire.  It will be fun to wear here at the lake.  Summer is here, both on the calendar and on the thermometer.  We have had the windows open for quite a few days - nights have been at such a good sleeping temp, but today the humidity has arrived and the air conditioner is on.  I am hoping that it gets a bit nicer at, say, 5:00-ish.  We just bought a bottle of pre-mixed Zombies and I think a little patio sipping may be in order.  I will wear khakis, a white shirt, and my new Lake Superior Necklace.  And bug repellant.  Jerilynn
Posted by Jerilynn at 3:44 PM 2 comments: 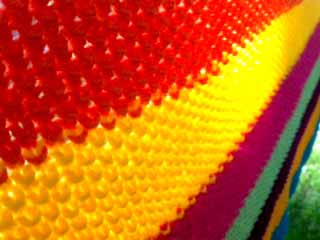 Here are a couple of shots of the afghan made from the leftover yarn from here .Again, this is a seed stitch, knit one, purl one.  The bottom shot is a more detailed look at the squishy goodness of this.  Once you get over the idea that you are going to knit one, purl one, for a very long time, it is the perfect Knervous Knitting project.  The yarn is acrylic, but of a very good quality and very soft, very washable.  Good for a lake house cuddle blanket.  Jerilynn

Posted by Jerilynn at 6:57 PM No comments: 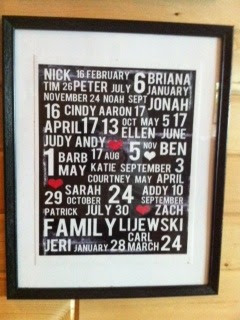 Jessicasprague.com has wonderful classes in photo editing, scrap booking, crafting, etc., using Elements. I have taken several over the years and they stay on file "forever" so you can go back and watch them again and again. The most recent class I took was a class on how to do Subway art. I learned so much...not just about how to make a subway poster, but about layers, brushes, sizing, canvas wraps, and more. I did a poster using addresses and places of Carl's life , my life, and our life together. I think I want to have this printed in big format, maybe a canvas wrap. Then I decided to play around with family names and birth dates. It took a while to get everyone to fit, and I know that some kid or grand kid will question their name size or placement, but, for now, the project is done. I printed it out as 8 x 10 on some ink jet canvas. It is hanging with all the family photos on the gallery wall. Lots of possibilities here, and would make a great gift idea. Although, how many people want a birthday subway art poster with my family's info? hee, hee. Jerilynn 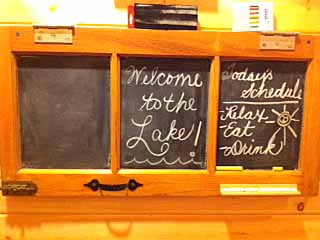 When we added on to our cabin, we also replaced all the old windows on the lower level with new, more efficient ones.  In the laundry room/bathroom, there were these cute three paned windows that were just too fun to toss out.  I bought some spray chalkboard paint, cleaned the glass, lightly sanded the glass with steel wool (not sure if that step really was necessary, taped off all the wood areas, and sprayed 5 - 6 light coats of paint, waiting about 20 minutes between each coat.  24 hours later I "seasoned" my new project with chalk to prevent word ghosts, and Carl hung it in our hall.  I read if you wet the chalk before you write, it looks faded, but dries to a darker color.  I will need to work on my chalkboard penmanship, but I think I will enjoy it.  We added a spare Scrabble tile holder to the bottom right to hold chalk.  I still have a big old window that has chew marks on it from when a squirrel got trapped in the cabin, two owners ago.  I think it would make a great frame at some point.  I like having a part of the old cabin put to new use.  The window is just happy to get out of the closet.  Jerilynn 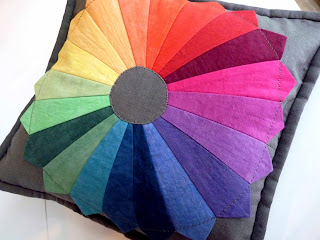 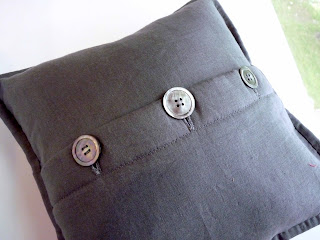 I taught a Dresden Plate pillow class at Sew Complete on Wednesday.  I only had two students, which turned out to be a lot of fun (Hi, Donna and Kay!)  It was such a relaxing day and I think both ladies liked their pillow.  Kay did her pillow like the class example, and Donna picked a stripe that reminded me of a Mexican fiesta.  Wish I had thought to snap a picture!  Prior to the class, I made the pillow pictured above.  I used some hand dyed fabric from my Cherrywood collection and some medium grey linen I had on hand that I bought from Purl Soho.  The Cherrywood fabrics are dyed to look like they could be wool or suede or flannel - such a great look.  I used the Dresden Plate template from
Anelie Belden's fast2cut Templates.  I have made quite a few Dresden Plate quilts over the years and I find that I don't tire of making those folded blades.  I have "pinned" quite a few ideas to my Pinterest board and think this will be a good pattern to use up some of my fabulous fabrics.  Low volume quilts are also calling my name, so maybe I will make a Dresden Plate quilt with low volume fabrics.  Too bad this morning's schedule includes helping Carl seal a wall from a big hole he dug yesterday.  The mosquitoes are going to love my ample frame to bite!  Jerilynn  P.S.  I forgot to  mention how much I love working with the linen for the pillow.  Too bad it is a pricey fabric.  After my no-more-new-fabric year is over, I may just have to search around for a good deal on some linen.  Such pretty texture, very classy. 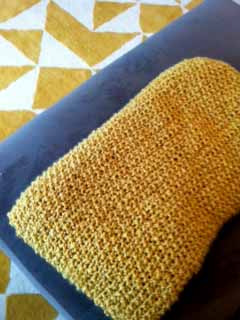 Back here I blogged about an afghan that I saw on The Purl Bee that was just a bit too pricey to make.  I started one out of yarn left over from another afghan, and I did get that done.  I guess I need to get a photo of that as proof.  In the meantime, we were down in Madison finishing up the basement project (well, Carl was finishing.  I was just there for support.)  I saw some yellow/gold yarn at Joann's, Lion Brand Homespun, a bulky weight.  It is 98% acrylic, 2% poly, and very machine washable and dryable.  I decided to give the knit one, purl one stitch a try on this yarn, using size 15 needles.  Zoom.  I used 4 skeins, casting on stitches until it looked wide enough, and stopping when it was long enough, thus, the 4 skeins.  The resulting afghan is sooo soft and cuddly.  Pretty inexpensive to make, and, with those big needles, a very fast and mindless knit.  I can't believe I have turned into an afghan knitter.  It is almost as easy as knitting dishcloths, and people seem to be more receptive to a nice, squoooshy afghan than to a pile of colored dish cloth squares.  I have been told that I have a child that has asked for warm, felted mittens, but I have ignored his request.  Yes, it is June, and finally getting to be summer, but the mosquitoes right now are the size of a small robin, so I think I will pick up another knervous knitting project.  Mittens it is.  Jerilynn 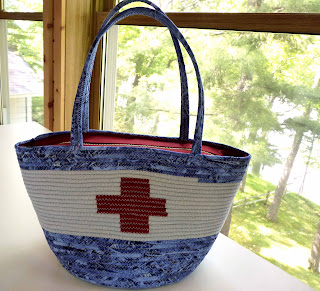 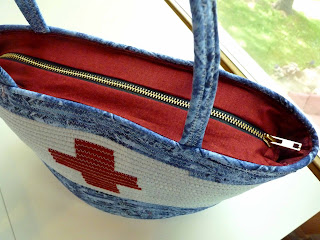 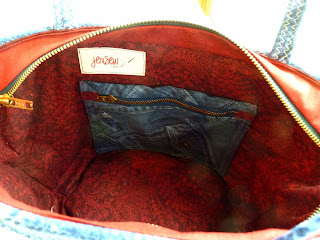 A new sample for my Quick Clothesline Carry-All was needed for Sew Complete.  The previous shop model was looking a little tired.  I had tried previously to use old jeans for the fabric wrap around the clothesline, but the result was a craft project gone bad.  I gave up that idea and just moved on.  Then, I noticed the blue jean printed cotton by Timeless Treasures Fabric, and I knew that it would give me the denim look I wanted.  I also had been batting around the idea to do some sort of red cross on the bag, piecing in the red as I sewed the background strips.  I learned something as I did this first bag - I need to have all the red pieces cut the same size and pressed before attempting to sew them in - duh.  Anyway, the result is kinda cute.  A bit off, but I am going to call it folk art.  Primitive.  Hand crafted.  I also did a zipper closure with a separating zipper.  Again, this first attempt has some rough edges, but I am going to work on an easier method.  The zipper on the top I purchased at Sew Complete - the pocket zipper is torn from a pair of Carl's old jeans.  I hope he doesn't mind.  Jerilynn 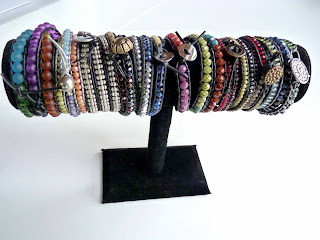 Just checking in.  We are on the road again...this should be the last trip for this summer.  I assume that any day  now we will have warm, sunny weather, but I can't be positive about that.  Last night's news said that May was the dreariest, gloomiest, awfulest May in decades.  I could be making up words, but the sentiment is true.  I have been putting time in the studio, finishing a few things and teaching a new sewer how to make a Big Bottom Bonnie Bag.  I also bought the above stand to hold my wrap bracelets.  I guess I should have bought the double one or at least one more single.  I hope to list some of these on Etsy when we get back.  They will be somewhere between $35.00 and $225.00 (the $225.00 is the Sundance price and I just threw that in so you would see what a bargain I am!).  My Knervous Knitting has produced another afghan.  Goodness, I am behind in showing you pictures, aren't I?  Jerilynn